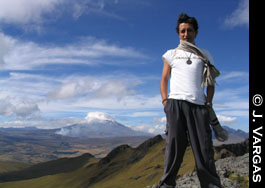 There are no words to explain the wonder of seeing howler monkeys, jaguars, and peccaries in their natural environment among the forests and rivers of Ecuador. I love to work in the middle of it all – sharing the same space as Ecuador’s wildlife.’

From the time he was just a child, Javier liked to be in contact with nature – in the forests and in the rivers – getting to know all the different wild places. His father likes nature, too, and would take Javier and his brothers outside often.

When he started his education and through his high school years, Javier’s favorite classes were always natural sciences including the biology of animals, ecology, and protected areas. Javier even liked the homework! His favorite memory is an assignment on Yasuni National Park, in which he described the flora and fauna that live there. Javier made a drawing of the park’s logo, which is a harpy eagle, the biggest eagle of the Amazon. From that moment on, he knew what his future would hold he wanted to become a biologist.

At university in Quito, Ecuador, Javier worked as a volunteer at the Natural Historic Museum of Ecuador in the Entomology Department. After that, he worked in foundations for the conservancy and made field trips, took data, and traveled around Ecuador learning more about its natural history. For two years, Javier lived in the Galapagos at the Charles Darwin Research Station and studied the effects of introduced and invasive freshwater macroinvertebrates species.

Javier’s first job was at the Guayllabamba’s Zoo as Assistant Director of Animal Management. This position, along with other work experience, eventually led him to his current position with WCS, where he monitors the animal populations in the Amazon and provides advice to decision makers about the effects of human activities on wildlife. The work in the communities is important – when we work together, the possibility to reach conservation goals is more likely to happen. The people that live around the forests and rivers are the ones that can protect and save their resources and territories.

Javier enjoys the travel that his work entails, but working to save wildlife brings him much more satisfaction than that, both personally and professionally. He simply cannot explain the wonder of seeing howler monkeys, jaguars, and peccaries in their natural environment among the forests and rivers of Ecuador.