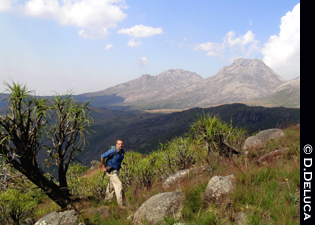 Although conservation always interested Tim, he didn’t know if pursuing it as a career was a realistic goal. He went to college to study zoology and went on to get his PhD in parasitology. After completing his doctorate, he worked as a writer/editor before volunteering for 2 years in Uganda doing forest research. Tim is certain that had he not had this volunteer experience, he wouldn’t be where he is now.

And where is he now? Well, in Tanzania mostly, working as the Country Director of the WCS Tanzania Program. Along with managing the country program, he carries out research in the rainforest, does environmental education in remote villages, plants trees and works alongside senior government officials. Like so many others working in conservation, it’s the variety of his work that Tim enjoys most. There is no typical day. And although his work can be physically exhausting and at times incredibly frustrating, it is never boring! Best of all, when Tim feels like he or his team have achieved something and added a small piece to the big conservation puzzle, he is extremely satisfied.

Tim feels that as a conservationist, he needs broad skills and experience in order to seek compromises. His knowledge of zoology and ecology are very important, but equally important is an understanding of the people who are directly affected by his efforts. What is it like to be a leading politician, or a rural African living on less than a dollar a day? What motivates different people to do what they do with their environment? How can you earn people’s confidence and trust? How can a compromise be reached and yet everyone kept happy? It is only with an appreciation of people that conservation can be truly achieved.

WCS often works in places that no other conservation organization does. This is very much the case for Tim’s projects, so in many ways everything he does is important for conservation, from raising awareness about an unknown place, to helping set up new national parks, to helping train the next generation of African conservationists.

Tim was awarded the 2008 Parker Gentry Award for Conservation Biology for his contribution to conservation including the discovery of a new monkey genus, the kipunji.