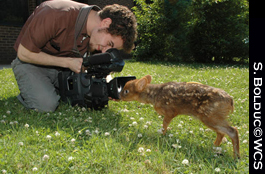 Monday I filmed fox kits. Tuesday I edited footage of grizzly bears. Wednesday I made DVDs of the Congo Exhibit. Thursday I recorded a podcast. And Friday I filmed the opening of a new exhibit. This line of work takes a ton of skills and a lot of hard work, but with a schedule like that, how can you go wrong?’

By the time Luke was in 7th grade, he knew he wanted to be a filmmaker. He found that making films and videos gave him a sense of personal engagement with the subjects he chose to film. In high school, he made as many videos as he could: from dramatic narratives detailing high school politics or racism, to silly comedies about young love, to documentaries about fishing on the weekends. Luke also interned for a New York production companies for two summers where he learned the fundamentals of industry film production.

Even as he was training to become a filmmaker, Luke found plenty of time to pursue his other passion: animals. As the son of a veterinarian, Luke’s childhood was full of up close encounters with creatures at zoos and while working at his father’s animal hospital.

During high school, he volunteered at the American Museum of Natural History in New York City. Luke worked in the department of invertebrates sorting, cataloging and maintaining the squids, worms and crabs in their collection. It was incredibly smelly work, but fueled his fascination for biodiversity and research.

It was only 2 years into film school that Luke finally found an opportunity at the Wildlife Conservation Society to fuse his passion for filmmaking with his ingrained obsession for wildlife. After several years of working part-time as a media production coordinator, Luke became the full staff videographer in September of 2005. Since then he has shot, edited, and designed a wide range of multimedia. Luke enjoys the variety of tasks that keep him busy and engaged. You might find him editing footage of endangered Puerto Rican crested toads or recording bison vocalizations. One day he will create promos of Central Park Zoo and on another day, he will work with reptile keepers at the Bronx Zoo to get close ups of venomous gila monsters.

Although it doesn’t involve field research in the jungles of Brazil, or directly caring for zoo animal collections, Luke’s work is important to conservation. By creating professional quality video and audio in many formats, he generates awareness and prestige for the NY Zoos and Aquarium, and for the Wildlife Conservation Society at large. By calling attention to these institutions and their message, Luke help to promote conservation itself.

You can see some of Luke’s videos at the WCS YouTube Page.