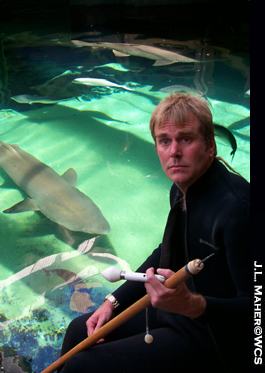 For as long as he can remember, Hans has been fascinated with sharks. As a little kid, he watched the marine explorer Jacques Cousteau on television. When Hans was 10, his father took him to see a documentary film called “Blue Water, White Death.” It was made by a former trustee of WCS named Peter Gimbel, and it followed a group of divers as they sailed around the world in an attempt to capture the first underwater footage of great white sharks. That cemented his desire to be a scuba diver and marine biologist.

Hans’ family originally lived in New Orleans, but Hans spent his high school years in the Midwest. During those years in the midwest, Hans could only think of one thing: getting back to the coast. So he chose the University of Miami (Florida) for college, working and studying under shark expert Dr. Samuel Gruber. However, Hans had another passion for music. So he took an extended detour away from the field of marine biology and dived deep into the world of rock n’ roll. His post-college musical career brought him to New York, where he needed to have a day job’ in order to make ends meet. A series of temporary jobs led him to WCS and the Bronx Zoo. On his days off from the zoo, he volunteered at the New York Aquarium.

After a number of years pursuing music, Hans decided that it was time to trade one exciting career for another, and that the New York Aquarium would be the best way for him to reenter the water. Each day, Hans has the opportunity to work with and learn about a very diverse group of animals (marine mammals, birds, reptiles, fish and invertebrates), and share that knowledge with others. He enjoys working with a team of extremely talented and diverse group of people to ensure the health and safety of the aquarium’s animal collection. His work also raises public awareness about the importance of conserving wild animals and natural habitats.

Hans feels that the opportunity to do conservation research as part of his job is an incredible gift. For part of the year, Hans studies sand tiger sharks in the wild. The information he gathers about their behavior and migration not only helps us better understand these fascinating animals, but may help develop strategies for protecting marine habitats and other marine animals.

When asked what he would like to say to teens considering a career in conservation or in his field, Hans replied, The best advice I can give anyone when choosing a career and vocation in life is that you can do or be whatever you want in life if you set your mind to it. This is a very important fact to remember, because ultimately the only person responsible for your satisfaction and happiness in life as an adult is you.

“Wildlife conservation is a very diverse field, but there are limited opportunities and even more limited financial resources. You will NOT ever get rich in this field, so you should only get involved if you feel passionately about doing so and if you are really interested in wild animals and wild places. If your parents have their dream about you being the next great scientist, and you don’t share that vision, it ultimately ain’t gonna work’ for you. Conversely, you will be unhappy if your folks have designs on your becoming a doctor and you truly want to put that biology degree towards work with sharks. That said, a career that blends wild animal care with wildlife conservation has enabled me to lead an extremely interesting and exciting life.’