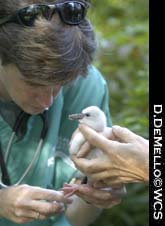 Zoo vets are responsible for keeping a variety of species healthy and thriving. This presents intellectual and logistical challenges on a daily basis so one never stops learning.’

In high school, Stephanie always loved the sciences. This is when she first thought about pursuing a career in veterinary medicine. She worked on a horse farm during the summers cleaning stalls, working with the horses, watching the vets and the farriers (horse shoers). Even though Stephanie lived in an apartment as a child, her family always had small pets such as guinea pigs, rabbits, and a dog, so she grew up surrounded by animals.

When she went on to college to study psychology, Stephanie also worked for a small animal vet. After college, she went on to work for a large animal vet as well as a small zoo. It was then she realized that she wanted to be a zoo vet. Stephanie attended vet school and worked with a zoo vet for four years. After vet school, she did a small animal internship with the hope of securing the Bronx Zoo Clinical Residency, which she did after her internship. She then worked for a small zoo with the hopes of one day returning to the Bronx Zoo. And here she is!

Every day there is something new to learn or do. Stephanie loves the challenge of knowing and working with a variety of species and comparing all their differences. She must care for all of the zoo animals, including mammals, fish, bird, reptiles, and amphibians. She might have to perform surgery on a white-naped crane, administer medication to a monitor lizard, and clean an African lion’s teeth all in one day! She also researches new medicines and methods of treating sick animals. By helping to keep animals in zoos healthy and humanely cared for, Stephanie educates zoo visitors about conservation issues.

Stephanie’s work is not only important for the individual animals she cares for, but for entire species. Since animals in captivity are the ambassadors for their counterparts in the wild, what we learn about their physiology, anatomy, medical and social issues can be applied to the free ranging population to help better protect them. As animals in the wild are crowded into smaller and smaller spaces, medical concerns become more like those in zoos. As animals become rarer, naturally occurring diseases and medical conditions can have devastating effects on an entire species. The information Stephanie learns through her medical care of zoo animals is applied to animals in the wild, aiding conservation efforts in a unique way.