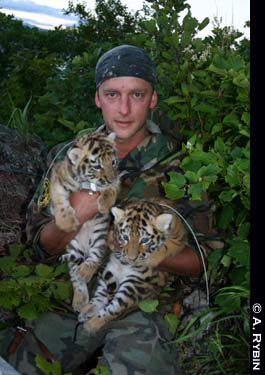 “Conservation is a career of passion. If you are passionate about wild animals, wild places and helping people live together with them, then follow your heart and you can change the world.’

John was born a biologist. Some of his earliest memories are of observing and interacting with the wild inhabitants of our natural world. When he was just two years old, John remembers digging up animal tracks in the mud so he could take them home. He remembers the fascination of watching pollywogs turn into frogs. As John grew up, he spent most of his time outside. His room was filled with fish tanks and terrariums. Fishing, hunting, hiking, rock climbing, and back-country skiing became his hobbies.

In high school, John found nothing that related to his interest in nature. He didn’t even know there were careers in wildlife and conservation biology until he was a senior searching through catalogs for college programs. When he came across a program called wildlife biology, there was no question in John’s mind that that was what he needed to study. Many people, including his guidance counselor, strongly discouraged the idea because the career would not make him rich. But John wasn’t concerned about money and while at the present moment he may not have enough money to buy everything he wants, he has enough to buy the things he needs.

His parents, who always encouraged his love of the wild, gave him a book about a scientist working on wolves on Isle Royal in Michigan. After reading it, John dreamed of studying large predators, especially wolves or mountain lions. In college, he pursued a degree in wildlife biology and volunteered for just about any related job. Studying Siberian tigers, the largest of cats and perhaps the ultimate predator, in the frozen forests of the Russian Far East, was literally beyond his wildest dreams.

John’s work involves studying wild carnivores Siberian tigers, brown bears, Asiatic black bears, Eurasian lynx, Far Eastern leopards in the wilds of the Russian Far East and using the information he collects to help develop conservation strategies for these animals and the wild places in which they live. In the field, John spends most of his time radio-tracking and trying to capture tigers and this is what he loves most observing and occasionally interacting with these magnificent animals while unraveling the mysteries of their secretive lives. Watching a 450 pound tiger stroll along a frozen beach on the coast of the Sea of Japan and holding a 5-week-old wild tiger cub in his arms are memories he cherishes more than anything. Knowing that he is helping save a place in the future for these animals is deeply satisfying. In fact, these things are worth much more to John than any of the material items a more lucrative career might have brought him.

If we are to conserve wildlife populations and the wildlands on which they depend, we must understand what they need. To set aside land for wildlife, we must know how much and what kind of land the species in question need. To prevent human activities like logging or agriculture from harming wildlife, we must understand the ways in which human disturbances influence wildlife populations and the habitat on which they depend. Collecting this information, analyzing it, and making it available to people is John’s job.